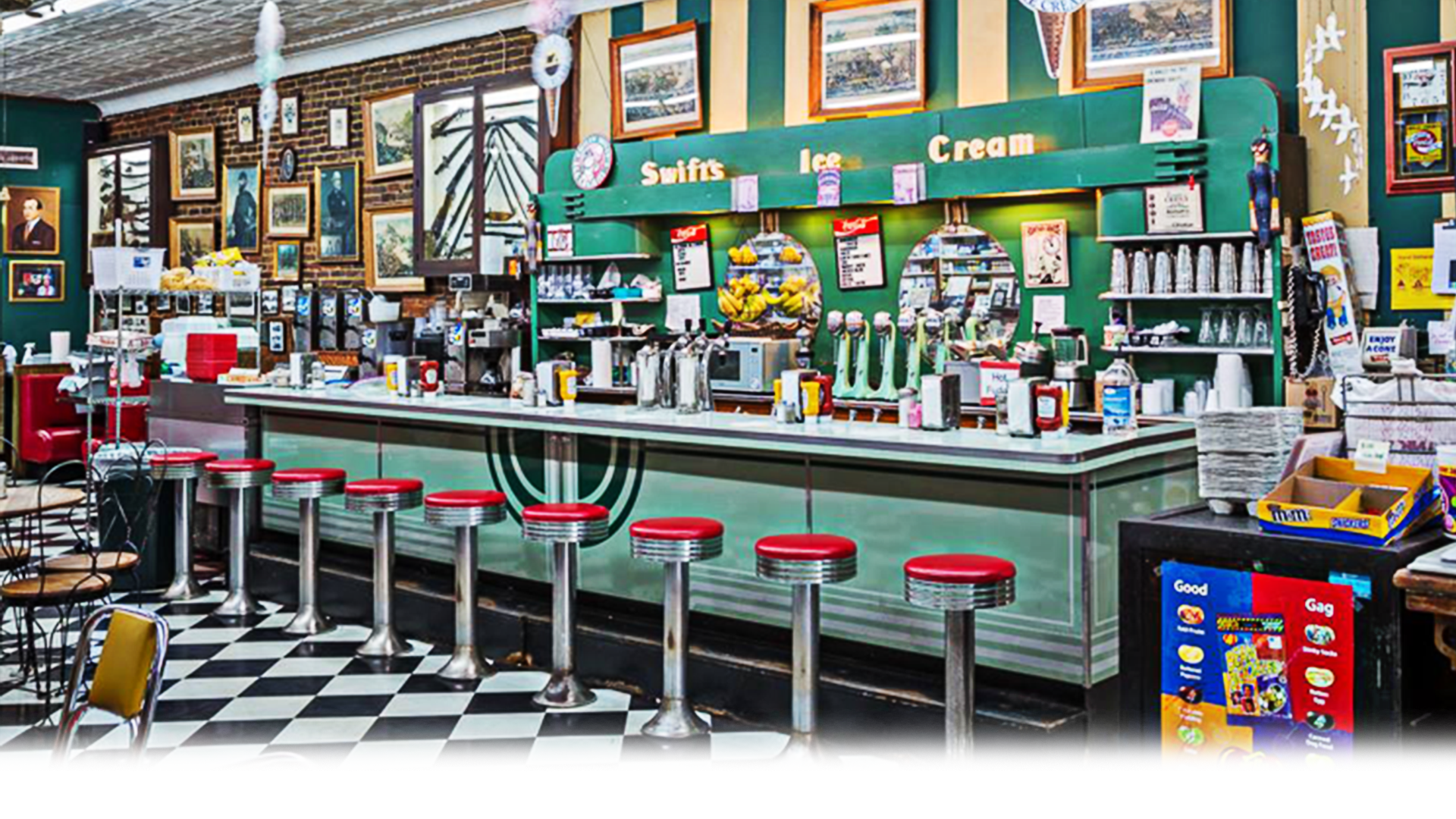 We are currently open from 9a-3p Monday-Friday and
Saturday’s from 9a-3p starting April 10th, 2022. Closed on Sunday’s
Click HERE to see our menu.

The history of the store begins as the war ends. Dr. Andrew Jackson (Jack) Borroum had just been released from a northern prison camp and Mustered out of the army at Atlanta, Georgia. He had worked for both the northern armies when he was captured and for the southern armies when he was free. With no particular idea in mind except to go home, he started toward Oxford, Mississippi on horseback. On his way he stopped in Corinth, Mississippi to look around and met a Dr. Young whom he had known before. Dr. Young convinced him to stay and practice with him. That he did, opening his office almost immediately. Corinth was still under military rule at this time. 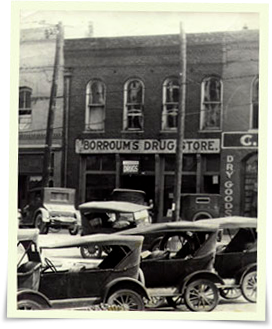 Dr. Borroum began to dispense medicines, having to make most of them and soon decided to open a drug store that was to be both wholesale and retail. As Corinth did not have one at that time. So begins the history of Borroum’s Drug Store that was destined to be Mississippi’s oldest in continuous operation. It was first located on #4 Front Street, now called Cruise Street and just this side of where the Corinth Water and Gas Company was originally located. Later it was moved to its present location 604 Waldron Street when the courthouse was built. The present building was built around 1843 and was originally a tannery with a livery stable next door. The walls are made of hand-made brick, which you can see when you come into the store, and are four bricks thick.

From that time on it was in the center of things. In some ways it was like a general store in that it carried a variety of merchandise such as perfumes, incense, drugs, herbs, tobacco, coffee, etc. as they became available. Oftentimes as his books show, he was paid in vegetables, eggs and chickens. His records do not show an account closed except upon the death of a customer. One way or another, as he accepted any kind of payment, they are all marked paid.

Dr. Borroum also put out a paper called, naturally, “Dr. A. J. Borrum’s Courier”. It was quite interesting, giving the reader information on various remedies both new and old. It would give information on the newest medicines and the arrival of fresh herbs and new merchandise. There would be poems, short stories, anecdotes, jokes and tall tales related to the time of year it was published and, of course, it advertised Borroum’s Drug Store.

Dr. Borroum continued his medical practice and the operating of the drug store for thirty-two years, his sons joining him as they finished their medical training. Upon his death, his oldest son, Dr. James Alexis Borroum (Lex), became the sole owner of the store. It continued as a wholesale – retail until the late twenties.

Dr. Lex differed from his father somewhat and had a great interest in politics. He also was a great animal lover and raised fine canaries in the back of the store building. His interest in politics made the store a great place to be on election night in Corinth. The scoreboard would be maintained on the windows until the last vote was in. The men would spin many a yarn and swap many dollars as friendly bets were won and lost. Many of Mississippi’s former governors started their campaign in Corinth by always coming by and seeing how ”the feeling was” as they talked to the customers and Dr. Borroum.

Some of our fondest memories are brought back when old customers return after many years to ”just look around and reminisce”. Corinth, being a border town on the Mississippi – Tennessee line, made it a hub for marriages for many years (at that time it was easier to get married in Mississippi than in other nearby states). It was quite customary for the justices of the peace to use the back of the drug store to marry people after courthouse hours. Not long ago one such couple came to the store ”to just look around” and explained that they were married here fifty years ago and were just on their second honeymoon. It was probably one of the ones I stole a peak at when I was just a kid standing on the crates behind the partition, sneaking a look as the couple said ”I do”.

Many things have taken place in this old drug store. I remember one time when Ed Allen was chief of police and the department had just gotten in some tear gas guns. In his displaying of the gun it accidently went off running all of the customers and the chief out of the store for many hours. Finally, with the help of McPeters Funeral Home the fumes were dispelled, though it was many days before your eyes didn’t smart.

After Dr. Lex’s death in 1932, Conrad, Dr. Borroum’s oldest son, his wife Cristle, and his mother Willou operated the drug store. About five years later Conrad went to work for TVA and the younger son, Col. James Lannes Borroum and his wife Loretta with his mother Willou took their turn in operating the store. He continued to run the business until his death in 1975. He modernized the drug store in the late thirties, adding a new soda fountain with booths and tables and yes, even a jukebox. He also put in new fixtures and later added a more modern glass front.

The store has changed with the times, changing as the ”trends changed” until the arrival of the ”chain store era”. The family has decided the store should stay the same, offering the services it has for a hundred years such as charge accounts without service charges, free delivery, free gift wrapping. They also offer free blood pressure checks and senior citizens’ discounts (being the first in this area to do this). Another plus is their personal shopper service to their elderly customers, those too sick to get out, or those who have some other type of emergency.

The store has a museum area where some of the original cobalt blue dispensing bottles with the gold leaf labels and the medicinal names written in Latin are displayed along with pharmaceutical scales with amethyst balances, medicines, and other antique paraphernalia, including a tiny midwife spoon for measuring portions of medicines. It also has a large Indian artifact collection on display that was personally collected by Col. Lannes Borroum and a civil war collection that both Col. Borroum and his brother Conrad assembled. In this collection hangs the sword and scabbard and powder horn of Jessie Kilgore Borroum, Dr. Jack Borroum’s brother who was killed in the Battle of Atlanta. Dr. Borroum brought it back with him when he was mustered out of the army in Atlanta. 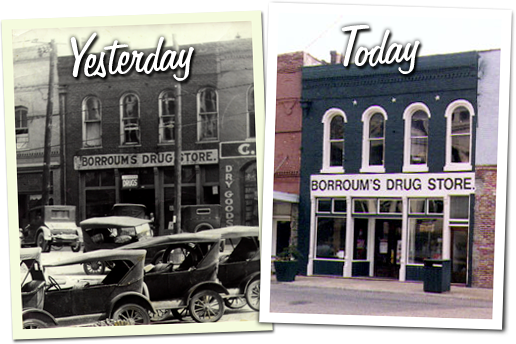 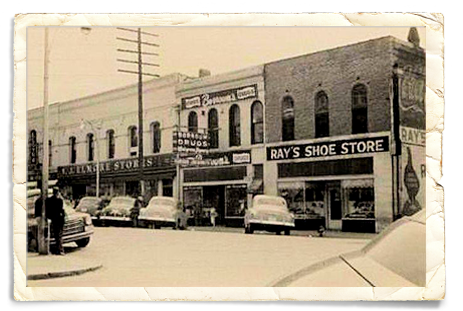 Loretta, Camille, Dr. A. J. Borroum’s great-granddaughter is operating the drug store with her son, Alexis (Lex)., and Corinth’s first woman pharmacist, a pioneer in a man’s field. She has practiced pharmacy for forty-six years. The old soda fountain is still very much in the center of things and is kept in perfect operation by the ingenuity of her youngest son, Alexis (Lex). It has everything from real malted milk to their famous ice cream sodas. Of course, there are the cherry phosphates and genuine old-fashioned cokes.

All of the senior family members have since passed. Willou, Dr. Alexis Borroum’s wife lived to be 90 years old and was a cashier for the soda fountain until just a few weeks before her death. Col. Borroum died in 1975. Conrad, the older son, died in1977 as did Col. Borroum’s wife.

Camille has four children and four grandchildren. Beverly, the oldest daughter, received a law degree from Ole Miss and is currently a judge in Columbus, Mississippi. Kimmons (Bo), the oldest son, is a realtor in Corinth and has one daughter, Kimmons. Camille‘s youngest are twins, Alexis (Lex) is a local contractor and helps with the drugstore. He has two children, Lex II, who works with his father in construction, and Leslie who works at the store. Lyn (Lex’s twin) has one son, Kirby, who works for his dad. The store has survived the changing times and is now over 150 years old and in the hands of the seventh generation.

Come by and have lunch with us today! 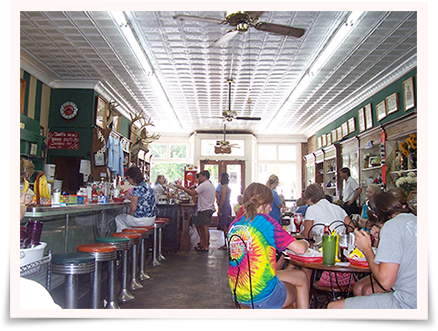 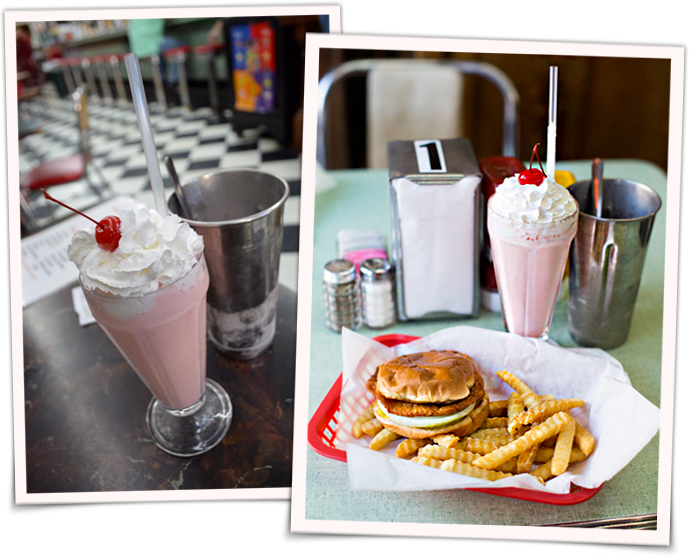 What exactly is a Slugburger?

Slugburgers burgers are a mixture of ground pork, soy flour, and spices. The mixture is flattened into a patty and deep fried in vegetable oil. The patty is placed on a hamburger bun with a garnish of mustard, onion, and pickle. Developed during the Great Depression when money was scarce and so was meat, slug burgers were made with a mixture of beef and pork, potato flour as an extender, and spices, then fried in animal fat. Mrs. Weeks, credited with creating one of the first, found the “burgers” were a way to make meat go a little farther at the family hamburger stand. Selling for a nickel, sometimes called a slug, the imitation hamburgers became known as Slugburgers.

Questions? If we can help in any way let us know!